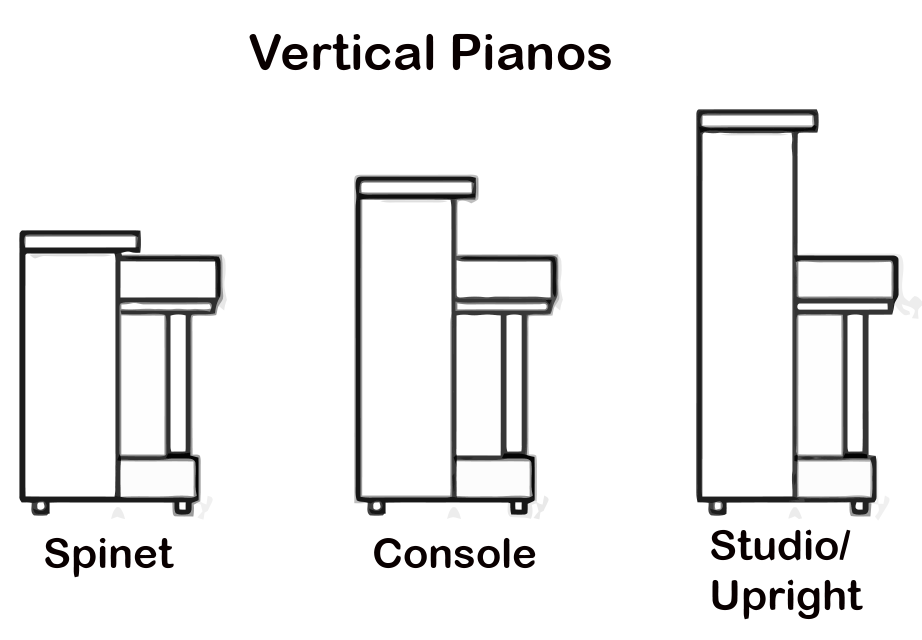 What are the differences among the spinet, the console, the studio, and the upright pianos? First a look at vertical pianos. The shortest is called a spinet and are generally 37-39” tall. Being very short, they constitute the greatest compromise in piano acoustics. This is because, although there is the clear convenience of the piano being smaller and more easily moved and perhaps easier to find space for, the compromise is that there is much less sound board area and shorter, thicker, strings. Spinets also employ what is called a drop action which has additional linkage between the action and the keys. This means less direct control over the action by the pianist and more to go wrong.

The Bigger the Better?

It is the size of the sound board and the length of the strings that give a piano its quality of sound; the bigger the board, the richer and fuller sound we get. The bass strings must have the correct mass to produce the lower pitches, since in a spinet they are shorter, they have to be thicker and less flexible (“tubbier” sounding). This affects the way the overtones are produced and each overtones’ strength. Longer and thinner bass strings produce a more desirable sound. The next larger size vertical piano is called a console. They are approximately 40-45” tall. They have what is called a direct blow action. This size piano is more desirable over a spinet, not only for its size (more sound board), but the direct blow action is more efficient and responsive. Quite often the cases on consoles are very nice, from a furniture perspective.

The next size up is called a studio piano and is often what we see in schools, churches, and teaching studios. Again, more sound board area and longer strings. The height of studio pianos can range from 46” up to 54” tall. Usually the cases of studio pianos are much plainer and more utilitarian. They usually have toe blocks to support the front legs rather than having the front legs free standing (which are more likely to get caught in the carpet and broken in a move).

The largest vertical piano is most often referred to as an upright. These are the old pianos from the first part of the 20th century and the last part of the 19th century. This means they are all at least 80 years old and often 100 plus years old. If the cases of these pianos are very ornate, it means they are older and are leftovers from the Victorian period. Piano actions do wear out and these old uprights actions are often worn, sloppy or broken.

These old uprights are expensive to renew and this work should not be attempted by anyone other than a qualified piano technician. A word of caution, pianos don’t really get to be antiques until they are about 150 years old. Don’t buy a 100 years old piano thinking you are getting an antique; there were, literally, hundreds of thousands of upright pianos made between the 1880’s and 1930. Remember, with no TV and very little radio, everyone learned to make music. It was great!

No matter the size, Music Sorb maintains the right humidity for your vertical piano and saves maintenance and re-tuning. Discover how