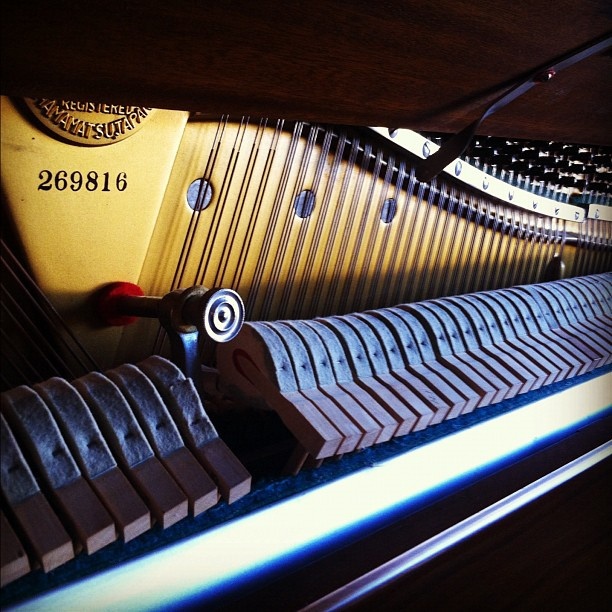 Many people who play piano don’t really don’t know a lot about the structure and mechanics of the instrument.  Mostly what they know is that if one pushes a key down a sound will come out.  So, when I go out to service pianos I understand a part of my job is to be an educator.  I want people to understand more about their instrument so they can appreciate more about what they have and understand how it works .

Did you know there are about 230-40 strings on a piano?  Most know there are 88 keys, 52 white and 36 black keys, but on each of the top two-thirds of the keys there are three string for each note.  As we go down the scale, then, there are two strings per note and then the last 8 to 12 keys at the left end of the piano, in the low bass, just have one string.

This practice of doubling and then tripling the strings pre-dates pianos.  In the top two-thirds of the piano, and other string instruments such as harpsichords, where the strings are progressively shorter and thinner, instrument builders would double or triple the strings, called adding a rank of strings, to add strength (loudness) to the sound.

The whole objective of the design of the stringing of the piano, called scaling, is to get the treble end of the piano to balance (same loudness) with the bass end.  I’ve been told that to create the pitch of the lowest note on a piano with the same gauge wire (the thickness) as the highest treble wire, it would have to be 27 feet long.  Since this isn’t practical, instrument makers, realizing they had to match the mass of a 27 foot long string, would make the core thicker and then would add wrap the core to achieve that same mass.  This is why all instruments today have the copper winding on the lower strings.