Humidity Ruined This Guitar in Just Half an Hour 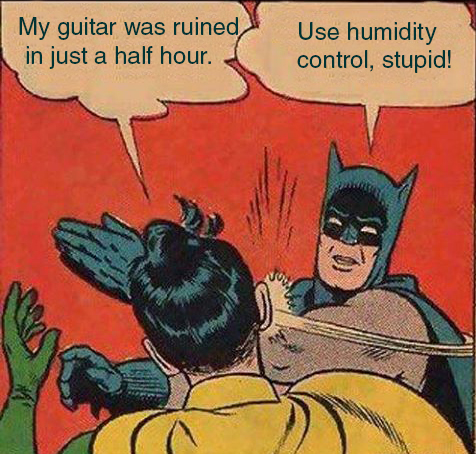 “Today I was playing my rosewood guitar in an air conditioned room (not a particularly good room for acoustic sound) and the guitar sounded really full and pleasant. After finishing up I took my guitar through to the porch where the door was wide open and left it sitting on a stand.

When I picked it up a [half-hour] later, it sounded thin and lifeless.”

That remarkable story sparked a fascinating thread on AcousticGuitarForum. It wasn’t just the difference in the sound the guitar produced in the two different environments but the speed with which the guitar changed. Just thirty minutes out of air conditioning and in 96 percent relative humidity was enough to turn the guitar from a rich instrument into something soggy and damp, even when the guitar’s owner played it again in the same room in which he had strummed it the first time.

Not all commenters in the thread were surprised. One person recalled how humidity in her apartment had fallen from 44 percent to 24 percent in less than an hour. That was enough time for a half-built guitar with a top braced and “slightly dished” to go flat and even invert.

“Not sure how it affected fully built guitars,” the commenter said, “I didn’t want to know enough to dry our all solid or even solid top guitars up.”

Another commenter described what can happen over a slightly longer period of time. Within three days of placing a violin in a humidor, the forum member says, they saw a two millimeter wide open center seam close up to “almost nothing.”

Humidity Works Slowly So Protection Must Work All the Time

Those are remarkable things to see. Humidity damage to music instruments is rarely that dramatic. More usually, it takes place slowly as the seasons change and humidity rises and falls. Cracks that start as hairline fractures on the surface of an instrument, easily missed, widen and lengthen. Fret boards rise and fall gradually so that the guitar or the violin feels slightly different each time you pick it up but not enough to be hugely noticeable.

The instrument sounds slightly different so as the humidity dampens or dries the wood, you will find yourself playing more often with the tuning knobs — and noticing as you do that they are either stiffer or smoother than the last time you used them.

You don’t really notice the changes taking place in your instrument until it’s too late, until the crack across the surface is big and unsightly, until the glue joints start to come apart and until the instrument just sounds so strange that you have to do something about it.

And by that time, you’re looking at a long time in a repair shop, and an even longer time paying off the repair bill.

The forum member who noticed the rapid change in their guitar was lucky. They received an instant lesson in what humidity can do to their instrument. The rest of us need to remember what humidity is doing — and make sure that our guitars and violins are always protected.

What To Do When Your Guitar Pegs Become Stuck